END_OF_DOCUMENT_TOKEN_TO_BE_REPLACED

As spring arrives at the Accokeek Foundation, so too have fresh eggs, as our chickens have begun once again to lay.

These black and white Dominiques are recognized as America's first chicken breed.

Our two flocks are some of the stars of the barnyard, clucking and cooing and even controlling small pests. Indeed, our lustrous red Buckeyes—the only American breed created entirely by a woman—are vigilant in their pursuit of mice (and have even been compared to cats in this regard). Right next door lives a flock of Dominiques: black and white barred birds that are recognized as America’s first chicken breed.

The conservation of endangered livestock breeds—from our heritage chickens to our heritage hogs, sheep, and cattle—is just one small piece of the Foundation’s wider historical mission. But with fresh brown eggs in our kitchen and insects out of our barnyard, keeping chickens often seems more like fun than work.

This course will provide you with the information that is needed to raise your own poultry. Participants will receive a handbook and other take-home materials. Pre-registration required.

To learn more about keeping chickens in Prince George’s County, visit www.pghens.com or send an email to princegeorgeshens (at) gmail (dot) com.

The View of Mount Vernon from Piscataway Park

In 1793 George Washington wrote that, “No estate in United America is more pleasantly situated than this.” Three years later the noted architect, Benjamin Henry Latrobe, painted the “situation” that so pleased our first president. His watercolors show a lush, pastoral landscape on the Maryland side of the Potomac. Fortunately for us and for posterity that landscape as seen from Mount Vernon has changed relatively little from what Latrobe and the numerous other people who visited Mount Vernon during Washington’s lifetime saw. As we celebrate the annual anniversary of Washington’s birth, it is worth noting that the Accokeek Foundation’s first job was to secure and hold the core of that view “for the benefit of the people of the nation.”

A half-century ago, in 1961, Congress enacted Public Law 87-362, authorizing the creation of Piscataway Park. It was only fitting that Piscataway Park was dedicated on Washington’s Birthday, February 22, 1968.

On this Washington’s Birthday we look not only back to past achievements, but forward to the challenges ahead. The view from Mount Vernon still faces the possibility of despoliation. Piscataway Park protects only 10% of the entire “viewshed.” The remainder of what we see is controlled by state and local governments and by thousands upon thousands of individual property owners. It also includes some extremely valuable and diverse historic and environmental resources: breeding grounds for anadromous fish (like American Shad and Rockfish), freshwater tidal wetlands, historic buildings and communities, mature upland forests, and habitats for rare plants and animals. The challenge now is to work with those private property owners, and the governments (federal, state, and county) that represent them, to find new and innovative ways to expand and enhance the protected area.

The Accokeek Foundation’s goal now and in the future is to preserve this beautiful pastoral landscape and the richness it provides to local residents, to visitors from near and far, and even to “the people of the nation” for many generations to come. We envision a future landscape, filled not only with well-designed and well-sited houses and businesses, but also the passive recreational spaces, sustainable farming operations, public River access points, and other amenities that make this an attractive and enriched place to be. The Mount Vernon Viewshed is truly a national treasure. The Accokeek Foundation is honored to be a part of its ongoing protection.

–A Letter to the Editor of the Baltimore Sun

The publication of the American Farm Bureau’s response to the Environmental Protection Agency’s plans to set a strict “pollution diet” for the Chesapeake Bay (Baltimore Sun, Jan. 9, 2010) provides us with an important opportunity to open up the dialogue between farmers and conservationists. Earlier this month, the Accokeek Foundation hosted a conference titled “Common Ground: Growing Agriculture, Restoring the Bay,” in which policy makers and farmers alike explored ways that profitability and environmental stewardship can go hand in hand. A panel of successful farmers affirmed that, in this region that prizes local food, pastoral landscapes, and a wholesome environment, the farms that are profitable in the future will be those that adopt sustainable practices and help protect and restore the Bay.

The Accokeek Foundation and other organizations with similar standing and expertise in sustainable agriculture should do all we can to ensure that farmers have the tools they need to adopt sustainable practices and find success. I hope that farmers will use this opportunity to work with new environmental regulations and reclaim their rightful role as exemplary stewards of the land.

The Chesapeake Conservation Corps was launched in 2010 to increase public involvement in environmental protection and bring in new participants to the field of conservation. The program will help individuals, communities, organizations, and governments become better stewards of our state’s natural resources. Sixteen watershed organizations and government agencies throughout Maryland such as the Accokeek Foundation, Alice Ferguson Foundation, the South River Federation, and the Maryland Department of Natural Resources have been provided with volunteers who will aid in environmental outreach and stewardship efforts.

We are excited to have Catherine Krikstan join our team. Starting mid-November with the Chesapeake Conservation Corps’ inaugrual kick-off ceremony, Catherine hit the ground running assisting with final preparations for the December 9th conference, Common Ground: Growing Agriculture, Restoring the Bay. This year, Catherine will work with staff to encourage agricultural and environmental stewardship, providing support to the Center for Agriculture and Environmental Stewardship (CAES) and the Ecosystem Farm. Over the course of the year, she will help to coordinate educational programs and workshops and support our public outreach and marketing efforts. She has a bachelor’s degree from St. Mary’s College of Maryland and recently earned a master’s degree in journalism from the University of Maryland. Her last semester of graduate school was spent covering the Chesapeake Bay for the Capital News Service, where she published stories in both local and national news outlets about struggling watermen, rising sea levels, and ever-expanding algae blooms. She has a strong interest in sustainable agriculture, and spent last summer managing her own small-scale Community Supported Agriculture program on the Eastern Shore.

Let’s all give Catherine a warm welcome and best wishes for a happy new year at the Foundation. 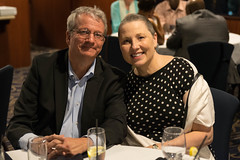